Cafelavista offers returns of 15% per year to investors who invest in its coffee machines.

Investors buy coffee machines for £3,000 each (+ £600 VAT if they are not VAT registered) and then rent back their machine to Cafelavista, which promises to pay a total of £5,700 per machine back to them (in rental income, an annual “ingredient bonus” and a final “balloon payment”) over a six year term, after which Cafelavista promises to take the vending machine back. 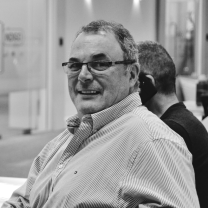 Prior to setting up the Cafelavista investment scheme, Spear ran a tiny website design firm which appears to have stopped work in June 2018, judging by its Facebook page. (Its last project was for The Tasty Plaice Fish & Chip Shop in Bridgend Industrial Estate.) According to Spear’s LinkedIn profile, prior that he ran “Spear Business Consulting” from 2004 to 2016. Spear Business Consulting has left no trace on the Internet that I could see.

Cafelavista Limited’s last accounts for February 2020 show little information other than £77k of net assets. The entity of most interest as far as the investment scheme is concerned is Vista Rental Limited, as this is the company which commits to pay returns to investors. However, Vista Rental extended its first accounting period to February 2021 last month, meaning it will not be due to file accounts until June 2021.

How safe is the investment?

In the stock market, the bigger the risks, the higher the rewards. With CAFELAVISTA, there are high rewards to be gained but a low risk investment.

This is misleading to the point of total claptrap. Fundamentally investors are not investing in a vending machine but in Cafelavista’s promise to pay them 15% per year. An unregulated investment in an obscure small company is not in any sense “low risk”.

Cafelavista claims its investment is “100% asset backed” and offers “guaranteed buy back”.

The guarantee to buy investors’ machines back is dependent on Cafelavista having the money to do so. Otherwise investors will be trying to sell used vending machines on the open market. In which case, given that they aren’t going to be offering a 15% per year return, they should expect a significant loss.

If investors plan to rely on the claim that Cafelavista is “100% asset backed”, it is essential that they hire professional due diligence specialists (working for themselves, not Cafelavista) to confirm that in the event of a default, the assets of Cafelavista would be valuable and liquid enough to compensate all investors. Investors should not simply rely on what Cafelavista tells them about their assets. 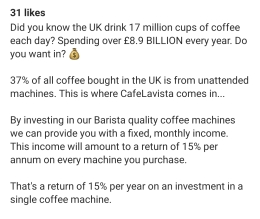 Issuing financial promotions in the UK requires authorisation from the Financial Conduct Authority. Cafelavista is not authorised by the FCA and there is no indication on Cafelavista’s adverts that the promotions have been signed off by an FCA-regulated firm.

If Cafelavista are pooling investors’ money to pay their 15% per year, this would constitute a collective investment scheme under UK law, which also requires authorisation from the FCA.

Running unauthorised collective investment schemes and issuing financial promotions to the public without FCA authorisation are both criminal offences.

Should I invest with Cafelavista?

This blog does not give financial advice. The following are statements of publicly available facts or widely accepted investment principles, not a personalised recommendation. Investors should consult a regulated independent financial adviser if they are in any doubt.

As with any investment in a tiny unlisted company, this investment is only suitable for sophisticated and/or high net worth investors who have a substantial existing portfolio and are prepared to risk 100% loss of their money.

Any investment offering returns of 15% per year should be considered extremely risk (despite Cafelavista’s nonsensical claim that investing in coffee machines isn’t subject to the universal rule that high returns = high risk).

As an investment in an individual micro-cap company with a risk of total and permanent loss, Cafelavista is much higher risk than a mainstream diversified stockmarket fund.

Before investing investors should ask themselves:

If you are looking for a “low risk” or “guaranteed” investment, you should not invest in unregulated investment schemes with a risk of 100% loss.